Hey! 👋 It’s me with another of my incredibly sporadic updates.

There’s been a lot going on in my brain over the past few weeks, so naturally I’m choosing now, when I’m most likely to commit egregious spelling and grammar errors and to produce a longwinded and disjointed post, to break my blog silence.

I’ve officially been in hospital long enough that my room’s decor has transitioned from Christmas-themed to Valentine’s-themed to Easter-themed. In other words, pretty much forever. 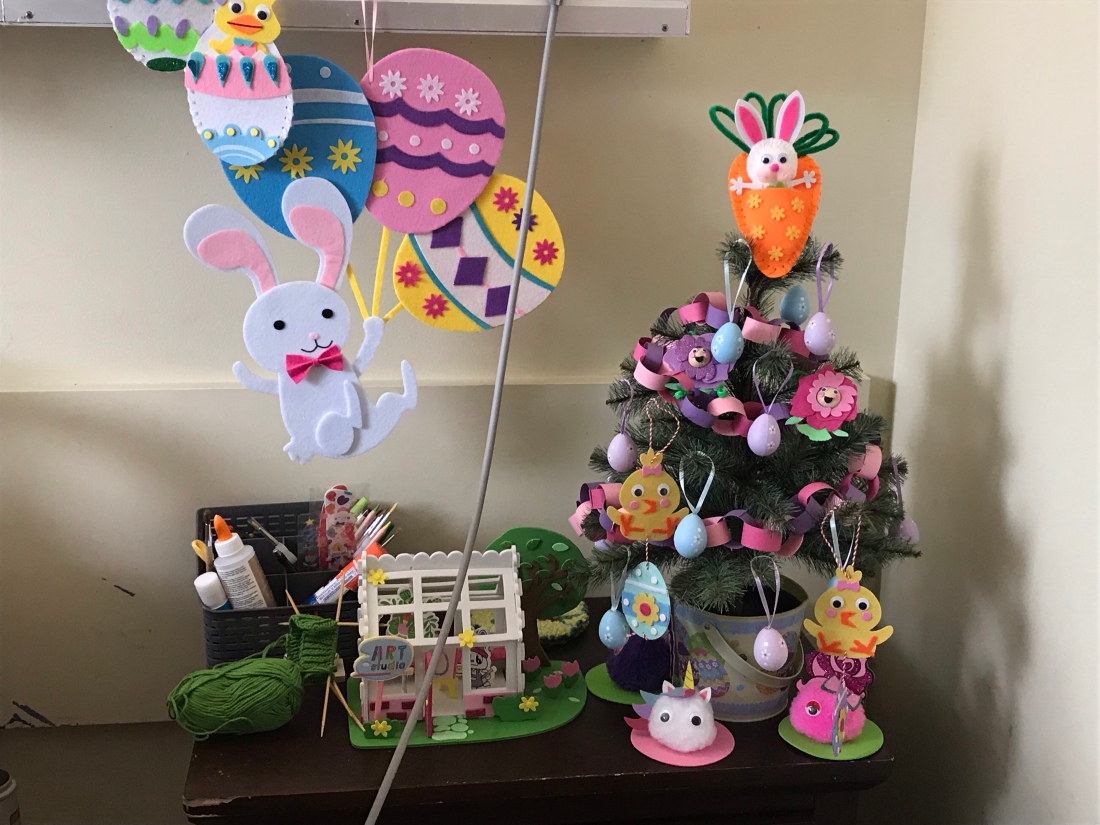 Yesterday, in fact, was the thirteen-week mark. Sometimes I feel as if I don’t have much to show for the three months I’ve invested here; sometimes I see how much I’ve accomplished; most of the time, thankfully, I’m able to accept that since I don’t have much choice but to keep at it, there isn’t any point analyzing the progress I have or haven’t made.

I won’t say that the ups and downs that I’ve experienced as my team has tried to tease out a care plan that makes sense for me haven’t been super frustrating. Though the severity of my seizures goes through phases, the week before last was especially bad—the critical care unit had to be called in several days in a row, and I was given enough lorazepam (commonly used to break long seizures) via IV to tranquilize an average-sized zebra. I was also given a loading dose of Dilantin, which brought my level from low back into the therapeutic range. (Fingers crossed it stays there.) As a result of that and whatever other mysterious forces determine how my fickle neurons behave, my seizures have returned to their recent “normal.” Still not great, but I’ll take it.

I have other big news besides this seizure excitement, and it coincidentally happens to be both related to my seizures and (kind of) exciting: with the blessing and support of the eating-disorder team at this hospital, I’ve transitioned to a ketogenic-esque diet.

I want to immediately clarify that I’m referring, obviously, to the version of keto used as a method of seizure control for people with epilepsy and not to the trendy weight-loss variant. Google will confirm for you that the ketogenic diet has medical origins and can be highly effective when employed for medical purposes, but its association with dieting, along with the extent to which it requires a drastic change in eating patterns, made my husband and I respond with an enthusiastic “no” when my epileptologist previously brought up the idea that I try it (to be fair, it probably wasn’t unreasonable that “person with a history of a restrictive eating disorder” + “very restrictive medical diet” struck us as an almost-carb-free ticket to an anorexia relapse). When the dietitians here suggested giving it a go with the support of the inpatient ED team and with the goal of getting my seizures down and my weight up, I reconsidered. When else would I have a chance to see if keto works for me while in such an ideal environment? If it does, we’ll have help figuring out how to implement it at home; if it doesn’t, we can cross it off our list of treatment possibilities, and I can transition back to the meal plan I was following before I said goodbye to most carbohydrates.

The change has been much harder than I anticipated. Indeed, it turns out that I really like carbs and that they’re in pretty much everything I enjoy consuming (ICE CREAM! AAAAAAHHHH!). It also turns out that cheese, butter, and nuts get boring pretty quickly when you’re eating them in large quantities on a daily basis. Still, I’m impressed that the team has been willing to try something different with me and have done the work to bring in the (very expensive) keto equivalent of Ensure Pluses and to modify the regular menu to make it more appropriate for my needs. It’s a good, and important, reminder that they have my best interests at heart. If I can do keto in a healthy way that facilitates weight gain right now and weight maintenance later, and if it helps manage my seizures, I imagine it’ll be a win-win: a reduction in seizures and motivation to stay on track once I’m back at home.

4 thoughts on “Another Update”